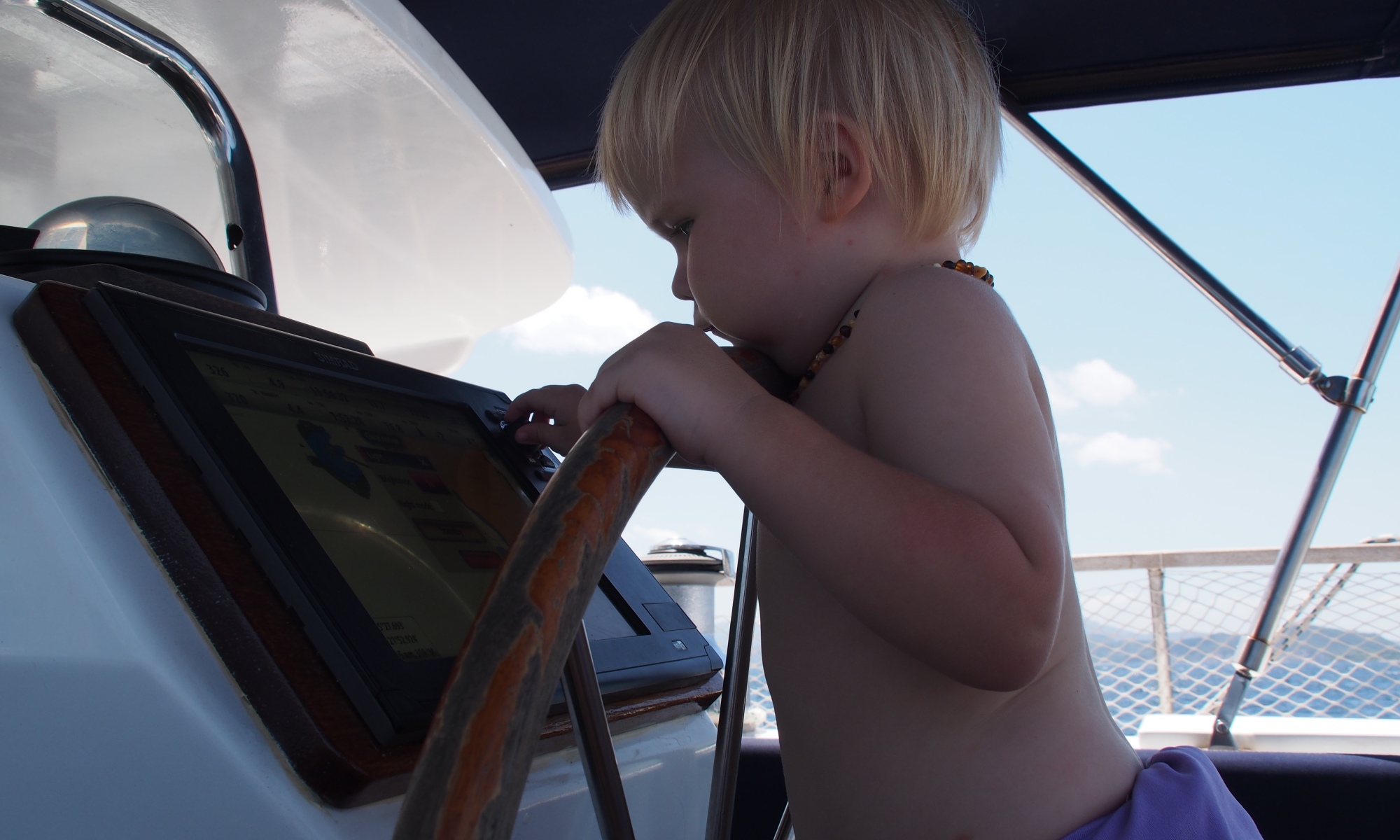 What makes this particular passage of interest to most is the little mini crew member affectionately referred to as “Powder Monkey.” In the 1800’s, Powder Monkey was the term used on war ships for the young boys who ran gunpowder from storeroom to gunnery. While we are void of powder stores and the machinery that requires it, our youngest qualifies as he is fast learning how to scurry about our ship, albeit on his belly.

As all parents know, there are small and large fears that lurk in the recesses of our minds when it comes to our offspring. As wardens of their welfare, it is easy to consume oneself with the “what if’s” of happenstance. While we have marched forward with determination to see our cruising lifestyle continue, it wasn’t without some trepidation that we watched land fade from sight. My biggest fear was seasickness as dehydration in an infant would be a major issue. Given there is 1,000 miles ahead of us on this trip, there would be no fast solution if Braca became ill. My second concern was knocks, bumps and falls, as the last thing a boat at sea offers is a stable surface. I’m sure a different set of parents would have a different list of concerns, but these were my two big contenders when it came to my son’s safety.

I am pleased to say that we’ve come through the other side after confronting these fears to no ill effect. Braca was unfazed by Atea’s osculating surfaces and fair seas left managing him on Atea a rather stress-free affair.

We sped along at 8 knots in quartering seas during our first 24-hours, putting 183 miles behind us in one day. It was a fast sail, and our biggest test during this passage was Braca’s ability to handle the seas. He was, fortunately, the only to appear unaffected. Even myself, yet to be seasick, felt queasy in the big rollers that slopped over our stern side. My number one fear was quelled in the first day – if that didn’t shake him, nothing would.

Fortunately, the rest of the trip has been remarkable from a mother’s protective eye. We’ve had wind on all fronts, so not always ideal from a sailor’s standpoint. The initial southwesterly wind that swept us forward eased mid-passage and turned toward the north finally swinging back around to the west on the fifth day. Though we were the last of the fleet depart Opua by several hours, we’ve quickly made good of the weather and positioned ourselves in the middle of the fleet. We cast our jerseys and woollies on the second day, enjoying the warmth of the tropics as we gained headway north. And so, my second fear was thus appeased by the amicable weather.

Life onboard a ship with an infant requires certain alterations. We’ve baby-proofed the interior so that Braca has a safe spot forward, mid-ship and aft. Our aft quarter bunk has a lee-cloth that turns captain’s quarters into a queen-sized playpen. We have a mosquito-proof baby tent that doubles as his cot that takes up half of the pilot berth, the other side a nappy changing table. In the saloon we have a porta-seat attached to the table, a reclining chair that is cushioned in place on the floor, and swabs that turn the side of the settees into padded walls for a safe tummy-time zone. In the cockpit we have a baby-seat come commander’s chair, and washboards that turn the cockpit floor into a kid-friendly zone. Every locker, drawer, and cabinet is stuffed to the brim with a sizeable collection of baby toys, and the bookshelf holds its own section of Dr. Zeus and Harry MacLary. Add in the stroller tied on deck, a baby backpack stowed forward and the nappies hanging on a line in the cockpit and we’ve fully transformed Atea into a Plunket-approved ship.

Cleaning nappies was a question often asked, and we’ve come up with a workable solution. Soiled cloth nappies are tossed into a mesh bag that is permanently fixed to the aft rail. We hang the nappies over the side for an initial rinse cycle, then they go into a bucket for a fresh water wash. The nappies are cleaner than any of the washing machines we’ve used ashore, which is particularly beneficial as they’ve turned into a permanent fixture in the cockpit, hanging like Christmas garland above our heads.

While Braca isn’t able to give an indication of his particular like or dislike for ocean sailing, he has certainly shown no signs of discomfort or disturbance. Life continues on Atea much as it did in the marina, with the addition of his father as another constant playmate. The added noise of rushing water, the occasional drum of the engine, the constant clatter of the drawers as they open and close to the sway of boat, the pots and pans that randomly rattle about don’t seem to bother him. Surprisingly, he has continued to develop his mobility while at sea, starting to add knees into his forward propulsion and learning, slowing, to crawl. He has also sprouted three upper teeth during the passage so his smile is starting to look less of an infant and more of a toddler, and of course with it, the shock of an occasional bite.

As I finish this we are 50 miles south of Aneityum, just visible on the horizon. We are sailing along at 6.5-7.0 knots, and will be in just before dusk at this rate. We will conclude our passage north from New Zealand in a few more hours and set our anchor down on new shores. Tonight we will celebrate – a toast to the 1,000 nautical miles of ocean behind us and to the first of many islands to come.

Tonight we will also celebrate the completion of Braca’s first ocean passage on his seven-month birthday, Thursday 17th of May.