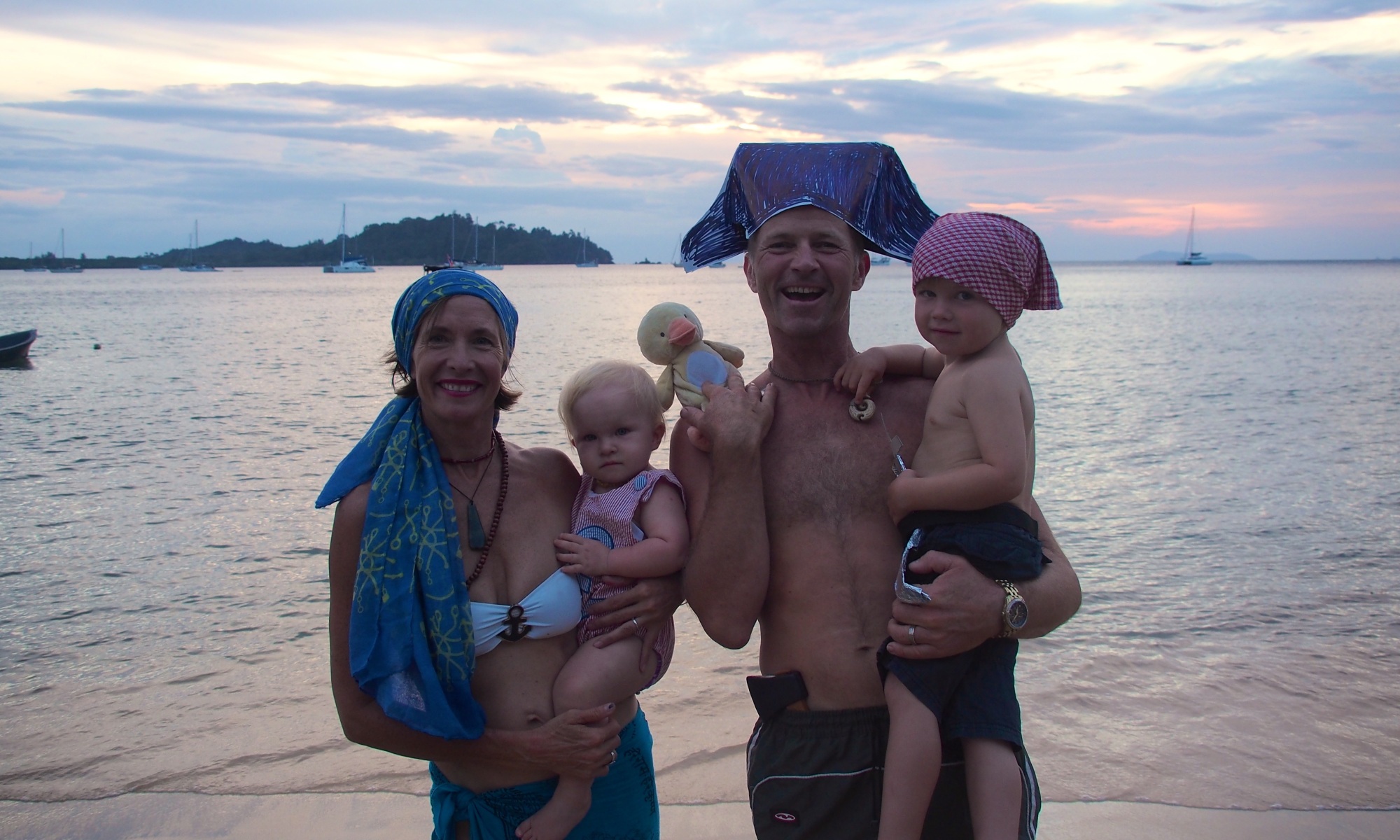 It is a laugh to report on our recent travels after my previous post that focused on the difficulties of the cruising lifestyle. That particular rant is certainly not representative of our current experiences, as our days are filled with highlights that tumble on top of highlights. Sure, we’ve had a few setbacks: We’ve flown our newly purchased drone into our rig and dropped it into the ocean, with half a dozen flights under our belt. We noted loose engine belts and found a crack in the water-maker mounting bracket, and spent a week on a water ration. Our refrigerator broke – twice. We spent one night in the middle of a thunderstorm and watched lightening strike the water around us, the world flashing electric blue, both horrified and completely thrilled by the experience. But all in all, our days are mostly filled with picture-perfect postcard settings, lazy days and rum cocktails.

We’ve spent the past three months exploring southwestern Thailand. This period seems less an off-track adventure and more a long extended holiday. Cruising in Thai waters is cheap and easy. Distances are short but there is variety depending on destination. If you use Phuket as a reference the following applies: Hop south and you are out of the general reach of mainstream tourism, free to pretend you’ve found a paradise not yet exploited. Head west and you are in in water so clear and you can see your reflection on the sand below, spending your days waterlogged, sun-kissed and beer-filled. East brings you into a labyrinth of sea caves and hongs that send you scurrying about with torches in total darkness, Pussy Galore and Bond-like, swimming or paddling through narrow winding passages until light finally breaks on the other side. Once through the cave and into the interior of the island, you are surrounded by thick jungle exposed to the sky from above. North offers a step away from mainstream tourism into quiet island getaways with tourists seeking to get a taste of a slower Thailand. Hit the hub, Phuket Central, and you are bustling for elbowroom amongst pink-skinned tourists, drinking cocktail concoctions out of buckets and gawking at bare boobs and lady boys.

Thailand is special for many reasons: the climate, the beautiful beaches, clear temperate water, the exceptional food and exceptional people, the inexpensive lifestyle. But for us in particular Thailand offers a social circle unique to previous seasons. I received more friend requests on Facebook after our first week in Thailand than on all our previous years of cruising combined. While using social media to gauge your level of social welfare has many inherent pitfalls, it is an example of how quickly friendships have been made this season and how many other cruisers we’ve been able to share company with.

What makes this particular group of cruisers unique is the collection of babes on boats (of the pintsized variety). Kid-boats: You avoid them like the plague. Unless of course you are infected yourself in which case you stalk them and hoard them like precious commodities. On pretense it is because kids enjoy kid-company. In truth it is to relieve oneself of the parental role of engagement. After weeks of being the only go-to for your child’s fantasy world, it is great relief when you can push them on another as a diversion. In addition, it is only those who have kids who invite those with kids onboard – and evening beverages is a staple for sanity on any ship. Given weeks of toddler games that leave you of crawling on all fours or tied up in rope, you really need both alcohol and adult companionship as a means of escape.

Regardless of reason given, it has been a pleasure to cruise in such a tight-knit group and have that connection with kindred spirits in foreign ports. Adventures jointly sought and holidays celebrated as a makeshift family unit have been a defining part of this season. As this year’s cruisers head onward and Braca’s flotilla of playmates dissipate, it will be interesting to see what dynamic a new influx of yachts bring.

January is a defining month as boats that intend to cross the Indian Ocean begin their migration. In typical Atea fashion, we enter the year with no set plan. Loosely, we’d discussed a trip that sends us north of Borneo into the Philippines. As we spent time with yachts heading across the Indian Ocean, our sights turned westward. To our surprise, unplanned influences look to direct us on a path independent of research or planning.

We have officially invited our third crewmate onboard.* Let me preface this with an earlier conversation that went along the lines of, “yeah, I’d be open to another,” at which time the conversation was decidedly more theoretical than practical. After firmly deciding that Atea would head west to Sri Lanka as soon as possible, medical advice has recommended that we don’t attempt a third pregnancy at sea. All significant test dates line up with the more remote regions of the trip, and given my age the BOLD FACE RECOMMENDATION is that we do not travel after 34 weeks – which would put us somewhere near East Africa. Such a timeframe would mean a race to the finish line, so to speak, to make it to South Africa by the beginning of August. We have decided that we will not choose the fast-track option and will leave an Indian Ocean crossing for another season.

As I write, each day we are committed to a new plan. While this indecision was starting to do my head in, I realize that all possibilities are good ones and we merely struggle to make the optimum choice – which of course changes depending on mood, amount of sleep, the state of chaos or calm onboard. So, wherever tomorrow takes us we will end up in a good place. If that decision happens to move us onward from Southeast Asia, we take with us a season full of friendships, paradise held in our fingertips and, of course, a belly full of rum.

* Please Note: We lost the child during the second month of pregnancy. I chose to include the comment about our third as it was part of our experience and I wanted this little soul represented in our season. Little sweetheart – you are missed.